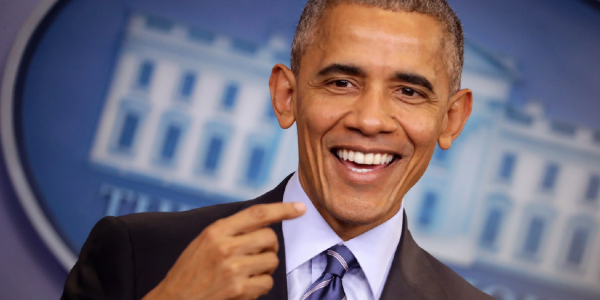 As the former President of the United States, Barack Obama seemingly can do no wrong.

He was golfing in Hawaii recently and met young mother Chelcie Edwards and her adorable seven-week-old daughter Paisleigh, and the cuddling that followed is something special to behold.

Obama kindly takes little Paisleigh into his arms and kisses her on the forehead, much to the excitement of her parents.

Joseph Edwards filmed the meeting and it's attracting the attention of the internet.

"I am baffled the President was holding my sweet baby girl. Ever since she entered the world our cup has overflowed with blessings," the overwhelmed father wrote on Instagram.

Chelcie spoke to Because of them we can about the personal meaning behind the meeting, and said;

"To have the First Black President ever to initiate holding our daughter, let alone kissing her on the forehead, has to be one of the most pivotal moments of any parents life."

"For our little girl to be in the hands of a man that is so influential, yet still so humble, and allowing her to experience something many will never get to experience is a blessing from God within itself," the mother continued.

"It’s just one of those things that’s just indescribable. This memory is one she will listen to for many years to come, as well as have for the rest of her life," she added, clearly cherishing the meeting wholeheartedly.

"As parents, we plan to share this monumental moment with our daughter through pictures, stories, and instilling in her who exactly he is and was before her time." She's certainly met some influential people for a seven-week-old.

"These are memories for her all while being able to live in a place Barack Obama calls home, Hawaii. Furthermore, I pray one day my daughter appreciates and understands the magnitude of what she was able to experience."

The former president also revealed to Paisleigh's father Joseph that he loved his own parenting experience;

"You can’t beat having daughters!" he said.