What a mess! Mum's slime pool idea is genius

Elisabeth Day is one cool mama.

On a rainy her children were stuck inside and bored. But instead of plonking them down in front of a Pixar film, she had another idea: a slime pool!

Yes, it is as crazy as it sounds. Usually us mums are trying to avoid the livingroom being turned into a sticky mess, never mind encourage it.

Taking to Today to share her goo-filled extravaganza, Elisabeth wrote that she initially had her doubts about the slime-fest.

"Like most 11-year-olds, our daughter is elbows deep in this slime craze," she wrote. "So when she asked to make a pool full of slime, the normal flood of anxiety and questions came to my mind. How were we going to clean it up? How much would it cost? What if the kids got stuck there permanently? After calming myself down from a mini panic attack, I decided to purchase the supplies."

Among the ingredients are some of our worst nightmares: we're talking glue, shaving cream, contact solution, and food colouring. Oh god.

But the mum had committed, and soon everyone was involved.

"We filled up a kiddie pool in the middle of our living room, dumped all of the ingredients into the pool and used our bodies (diaper and all) to mix the slime."

Was it worth it? Definitely!

At the end of the day, who cares about a bit of slime when there's so much fun to be had and memories to be made.

"This experience taught me something incredibly valuable," the mum-of-six continued. "Messes aren't so bad. As long as you aren't teaching your children to destroy things and have no regard for them, making a mess isn't a bad thing. 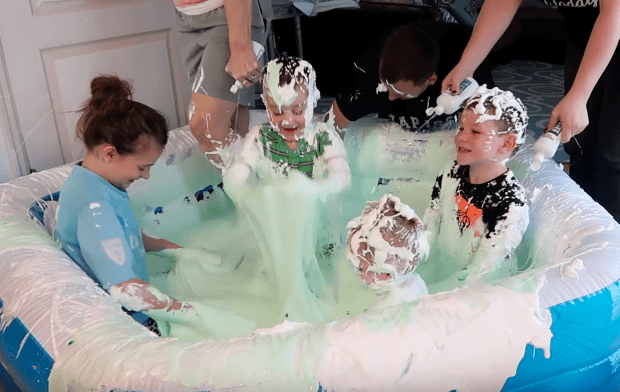 So cute- what do you think mums do you reckon you'll be embracing the slime challenge this summer?

Here's the instructions, so no excuses!